ABOUT THE TENNIS & RACQUET CLUB

The Tennis and Racquet Club is located at 939 Boylston Street, in the Back Bay neighborhood of Boston, Massachusetts. Designed by Parker and Thomas in the classical revival style, and built by Frank L. Whitcomb in 1902, the Tennis and Racquet Club is representative of the ornate private clubs constructed in Boston during the turn of the century. The Club still contains its original court tennis court and racquets court. Today the club also has three international and three North American squash courts, and remains the oldest athletic and social club in the city.

Originally a pastime of the nobility, the “jeu de paume”, better known as court tennis, is the founding father of all racquet sports. 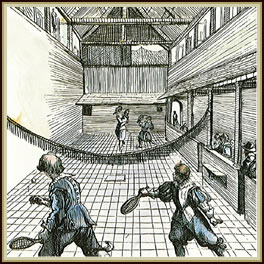 Court tennis is the original racquet sport from which the modern game of lawn tennis, or tennis, is descended. Court tennis is played at a number of active courts in England, Australia, the United States and France.

Court Tennis is also known as “real tennis” (England), jeu de paume (France) and “royal tennis” (Australia). The term real tennis is often thought to be a corruption of this last name and related to the game’s connection with royalty during its heyday in England and France in the 16th and 17th centuries. In fact “real” was first used at the end of the 19th century as a retronym to distinguish it from the then recently invented game of lawn tennis. Real tennis players often just call it “tennis”, describing the modern game as “lawn tennis”.

The game traces its beginnings to the 11th Century. Monks began playing handball around the cloisters of monasteries in Italy and France – rules varied to suit local whims and conditions. As monks traveled to other monasteries, the more enjoyable rules were more generally adopted, while the more bizarre rules abandoned. Players added features that improved the pastime, and demolished or modified others that detracted from it. The monks enjoyed the game so much that the Pope banned the game. By the 14th Century, the game had spread from cloister to castle and became a game of the nobility. 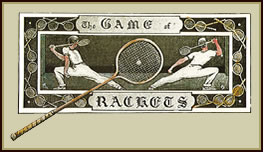 In its earliest form during the 18th Century, racquets was played in the open on the walls of the yards of the two main debtor’s prisons – the King’s Bench and the Fleet. Gentlemen, imprisoned until they could find the wherewithal to repay their creditors, amused themselves with many different activities around the prison yard. These included skittles, fives (which was played both with the hand and with a bat, as at Westminster School), and what eventually became known as racquets. Prisoners improvised against any convenient wall, sometimes with no sidewalls and always without a back wall.

Racquets requires speed of foot, agility, fast reflexes and as much “staying power” as any other game in the world. There are no pauses. Rest periods are rare. The playing rules of squash and racquets are quite similar. There is however, a major difference between games. The racquets ball travels far faster than the comparatively “dead” squash ball. 15 points comprise a game and only one serve is allowed. Any exchange of five or more shots is considered to a rally even for top flight players. Because of the incredible speed of the ball – 150 miles per hour – the serve is the most effective offensive stroke in racquets. The harder the ball is hit the more difficult it is to return. The game is played in the United States, Canada, and England.

Over the centuries, racquet games have become enormously popular. Yet, many of today’s clubs, in their single minded efforts to increase club memberships have sacrificed the very elements that gave racquet sports their original appeal, tradition and style; in a word, spirit.

Fortunately, spirit is something that needs only the proper atmosphere and the right people to flourish, which is precisely what we seek to provide at the Tennis & Racquet Club.

If you play squash, racquets, or even court tennis and seek the style and spirit of a “club” in its purest form, then consider the Tennis & Racquet Club.