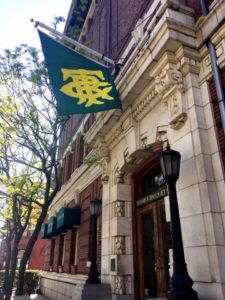 The Tennis and Racquet Club

The Tennis and Racquet Club (T&R) was founded in 1902 and remains the oldest athletic and social club in the city of Boston. The club is known for its century-old tradition of court tennis (the regal, slate-walled ancestors of all racquet sports), the unique and exciting game of racquets, and its top-rated squash program. The T&R also offers a fitness center, men’s and women’s locker rooms, function rooms, a full service member bar, and a full calendar of social events.

Our professionals, Tony Hollins (Director of Athletics) and Leon Smart (Assistant Professional) are among the best in the country. The professionals provide private and group lessons for members of all skill levels.

The T&R was founded to build camaraderie in a highly welcoming atmosphere unique to a club that combines social activities and athletics. Our squash leagues, frequent tournaments, and lively social events provide countless opportunities for the new and seasoned member to enjoy the club.

The T&R has reciprocal memberships with various racquet clubs located in the United States, Canada, and England. In addition, the club is a member of the IHRSA Passport Program which allows club members to access IHRSA affiliated clubs around the world.

Yesterday in Boston the T&R took on the National Tennis Club in the annual Patriot Cup; an inter-club competition for New England court tennis bragging rights.

We had a record sign up with almost 40 players between the two teams, battling it out over 18 matches.

Fitness Center – Cycling Classes are Back!

The Massachusetts Squash Leagues are a great opportunity to play new players at your level. Fixtures are home and away. Contact Tony Hollins to sign up.

King of the Newbies Champions

There are no upcoming events at this time.